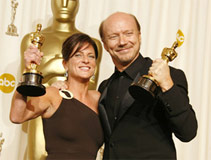 I know I was shocked when Jack Nicholson read the winner for Best Picture on Sunday night’s Oscar awards shows. Most were expecting “Brokeback Mountain”, after Ang Lee won for Best Director. But when “Crash” escaped from Jack’s lips, it sent waves of surprise throughout the entertainment world.

Regardless of the “Crash” win, it was a great night for “Brokeback Mountain”, who also won for Best Adapted Screenplay and Best Score. My picks this year were 14 out of 24, which was a bit better than I did last year (12 out of 24). Click the photo to see the complete winners list.

To be honest, I didn’t hate “Crash.” I thought it was a good movie. My daughter liked it as well, and actually predicted it would win Best Picture. But overall, I didn’t feel it was up to Best Picture status. For me, a best picture has great scenery, a wonderful story and actors that draw you in from start to finish. Heath Ledger and Jake Gyllenhaal kept my attention the entire film, with emphasis on Heath’s character, Ennis DelMar. For some reason, “Crash” didn’t draw me in until half way through the movie. I enjoyed the overall message of “Crash”, but just felt it wasn’t Best Picture calibur.

Perhaps the best moment of the night for me was Philip Seymour Hoffman taking the Best Actor Oscar for “Capote”. He’s been one of my favorite actors for some time now, with his best role in “Almost Famous”, playing music guru Lester Bangs.

As Truman Capote, he was dead on and enthralling enough to capture my attention throughout the entire film. Very much enjoyed his well-deserved win of the top actor prize.

I am now curious to see what role he takes next. While most of the movies he’s been in have been great (“Magnolia”, “Almost Famous”, “State & Main”), others like “Along Came Polly” left a bit to be desired, regardless of the fact that his character he played was still entertaining.